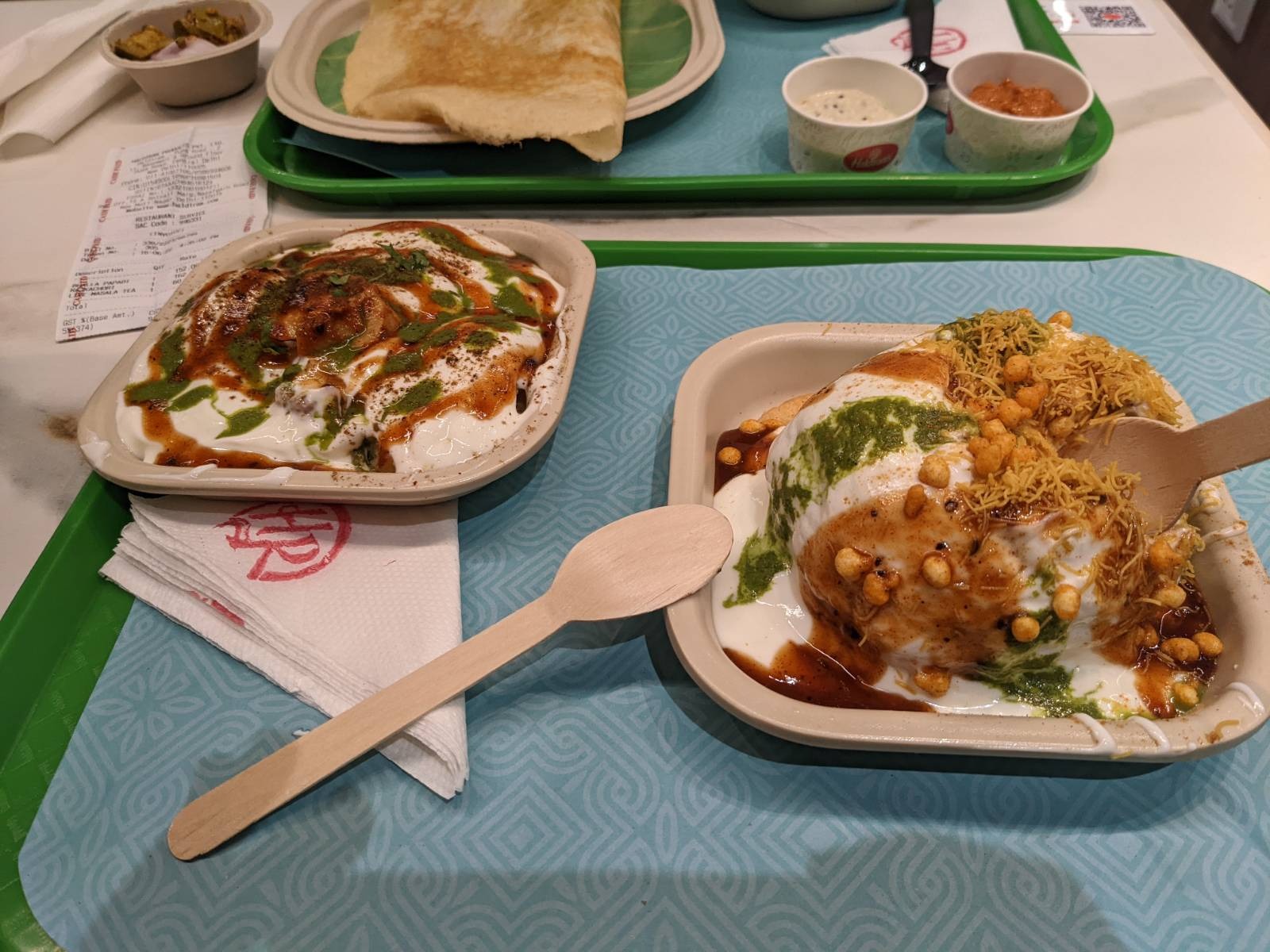 Together with module 4 students, we could only finish about half of the course. After about one and a half months, their time was totally occupied by working on their final year projects and learning for their last assignments. Since the final year project is very important for the last semester, they spent a lot of time preparing for reviews and finishing their project in time. Nevertheless, we had really nice and interactive sessions together exploring the basics of software architecture and Git as well as GitHub. After graduation, four students asked if they could continue working and finish the module anyways. But let’s see how this develops.

Module 3 is also already coming to an end since the students also have to prepare for their final examinations. At least in this module, we could cover all topics and assignments. I really enjoyed working with module 3 students since they were asking a lot (really a lot) of questions and we spent a lot of time coding together. From teaching-block to teaching-block, you could really observe their gained knowledge and progress. For example, in the first teaching-block students often used only one Java class that contained all the code for the assignment. Now they are using multiple Java classes and methods to split their code into meaningful parts. They also think about using meaningful and understandable names for parts of the code.

The classes for module 1 just started. Here we faced some challenges at the beginning. All computer labs were occupied for two weeks since some examinations were going on. So we had to move to the computer lab of another building during this time. But due to the beginning of the rainy season, there are a lot of power breaks, and the computers will shut down four to five times during a class. Students brought their own laptops, but only 5 out of 16 students do have a laptop.

At the project forge

ICT4D.at conducted an online project forge. During three rounds, different people came together, various projects were presented, problems were discussed, and ideas were gathered. Sadly this evening, my internet connection was really bad, and I had disconnects after disconnects. Luckily Florian took over and helped gather and note down the input from all participants. 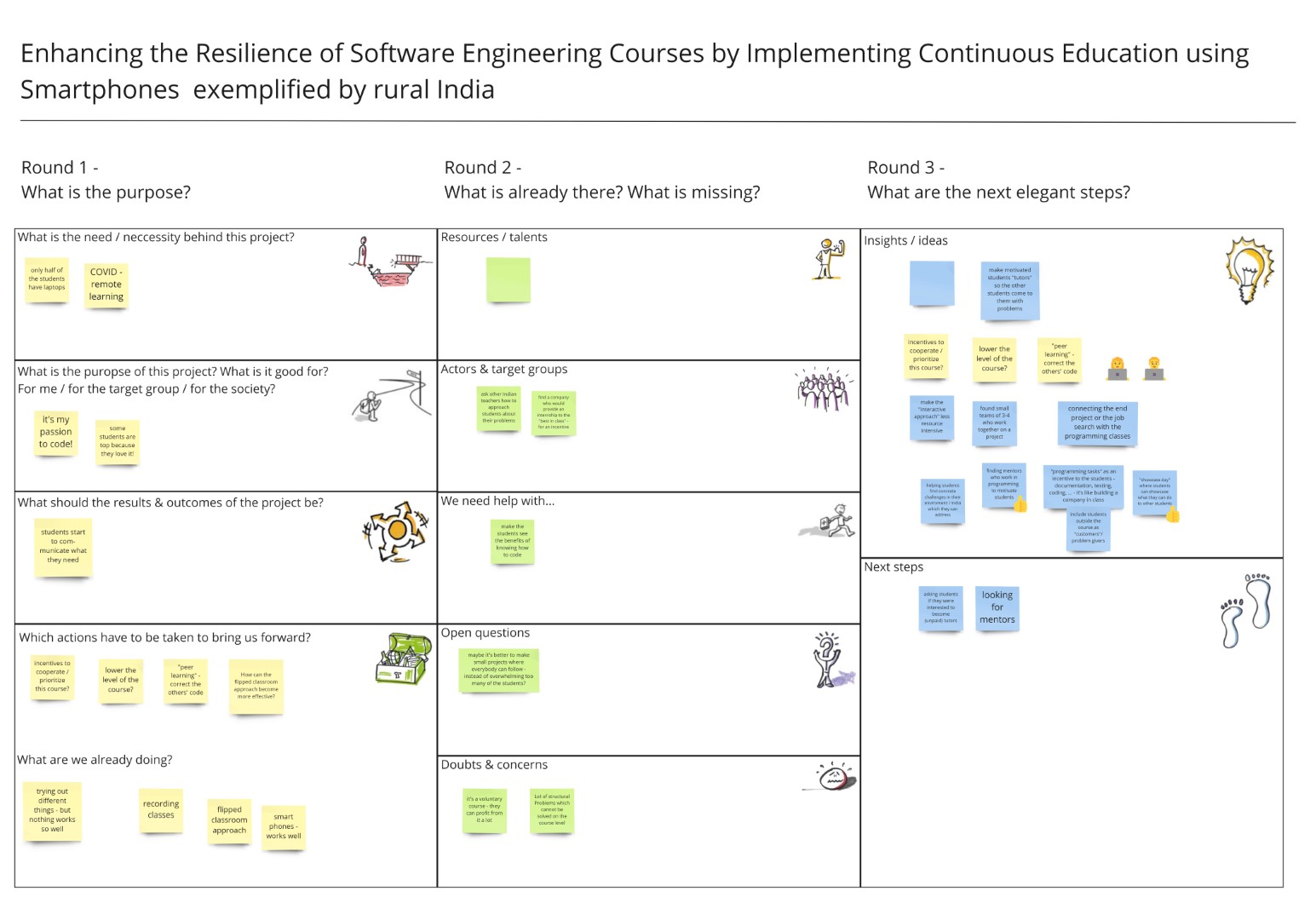 The outcome of the project forge

I really liked the idea of a “showcase day” where students present their projects and explain them to other students. Also, finding mentors (other students) who like to assist me to lower the barrier of other students asking me direct questions. Sadly since modules 3 and 4 are already on the finish line, I cannot really try those new Ideas, but I will try to implement some in future classes. At least for module 1 one or more “showcase day(s)” are planned. I also really like the idea of finding mentors. Last year I already wrote many messages to people on LinkedIn but did not get many responses. I had one person who was really interested, but due to the semester ending, the talk was postponed, but I think I should take the opportunity now to ask her again. Lowering the level of the course to address and reach more students is also a good idea. Maybe I can make current assignments easier and, at the same time, create some assignments that are a little bit more difficult, which can be done voluntarily for extra points.

At the Git workshop 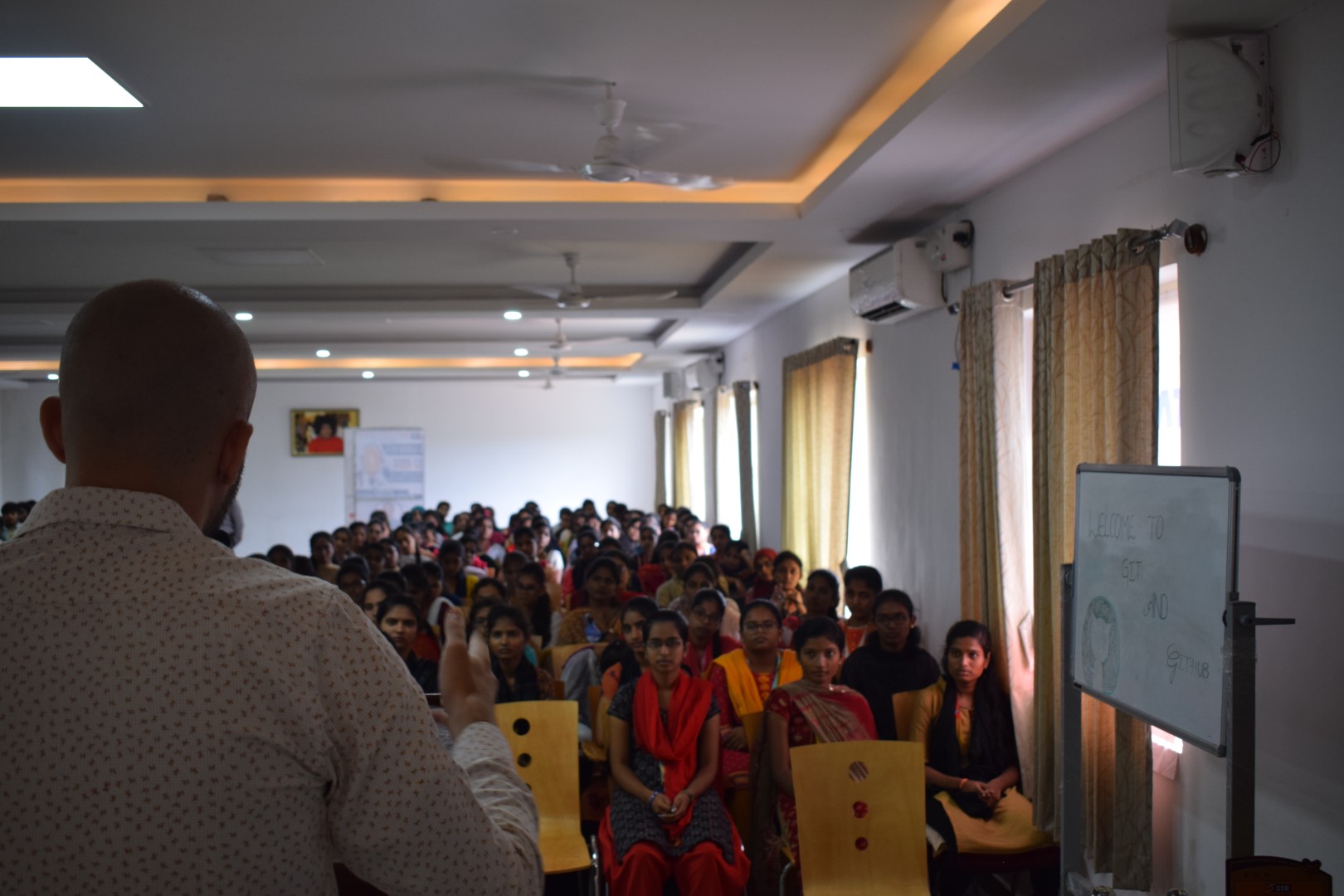 The participants at the Git/GitHub workshop

At the college, we had a one-day workshop on Git and GitHub. It was a really fun day together with the students. In the forenoon, I gave a talk about Git, GitHub, and some important concepts for using Git. If you want to see the slides, check out the blog post about the slides for a Git and GitHub workshop. During the afternoon, we had a hands-on session together with the students where they created their first website using GitHub pages. Also, students without a laptop could participate using their smartphones. There is an Android application called Spck Code Editor / Git Client for HTML, CSS, and JavaScript with an integrated Git client.

The only thing was that one afternoon was not enough time, and sadly, we had no computer lab available. Also, I was alone and there were about 70+ students. So next time for such a workshop the computer lab should be reserved and a whole day hands-on workshop would be better instead of only a single afternoon. Maybe also some senior students, like tutors, that help me answer questions and work together with the participants during the hands-on workshop would be a great help. At least one student told me after the workshop that she did not know the difference between Git and GitHub, but now she knows. In addition to that, we now have new GitHub users, and some students are still working on their websites. 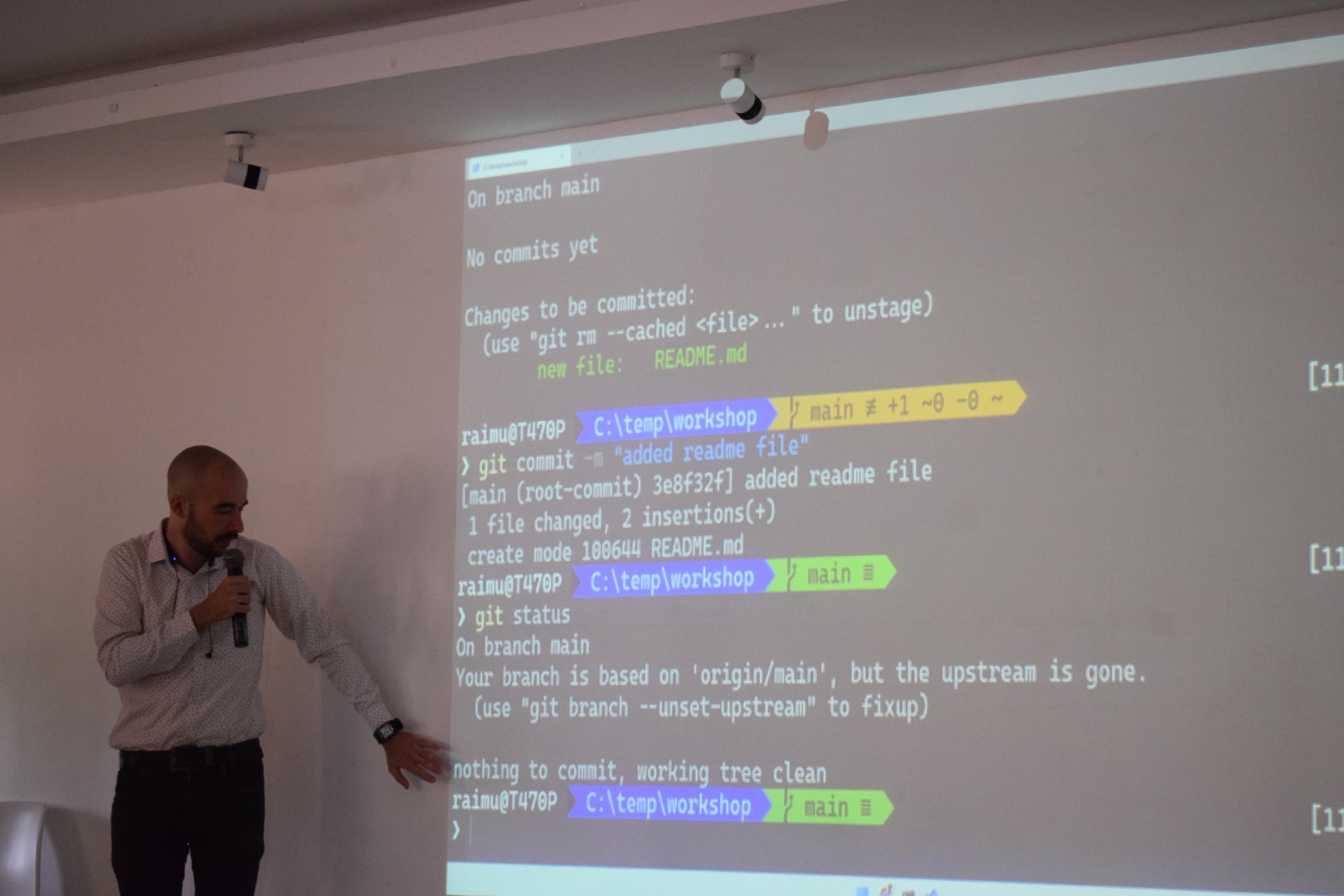 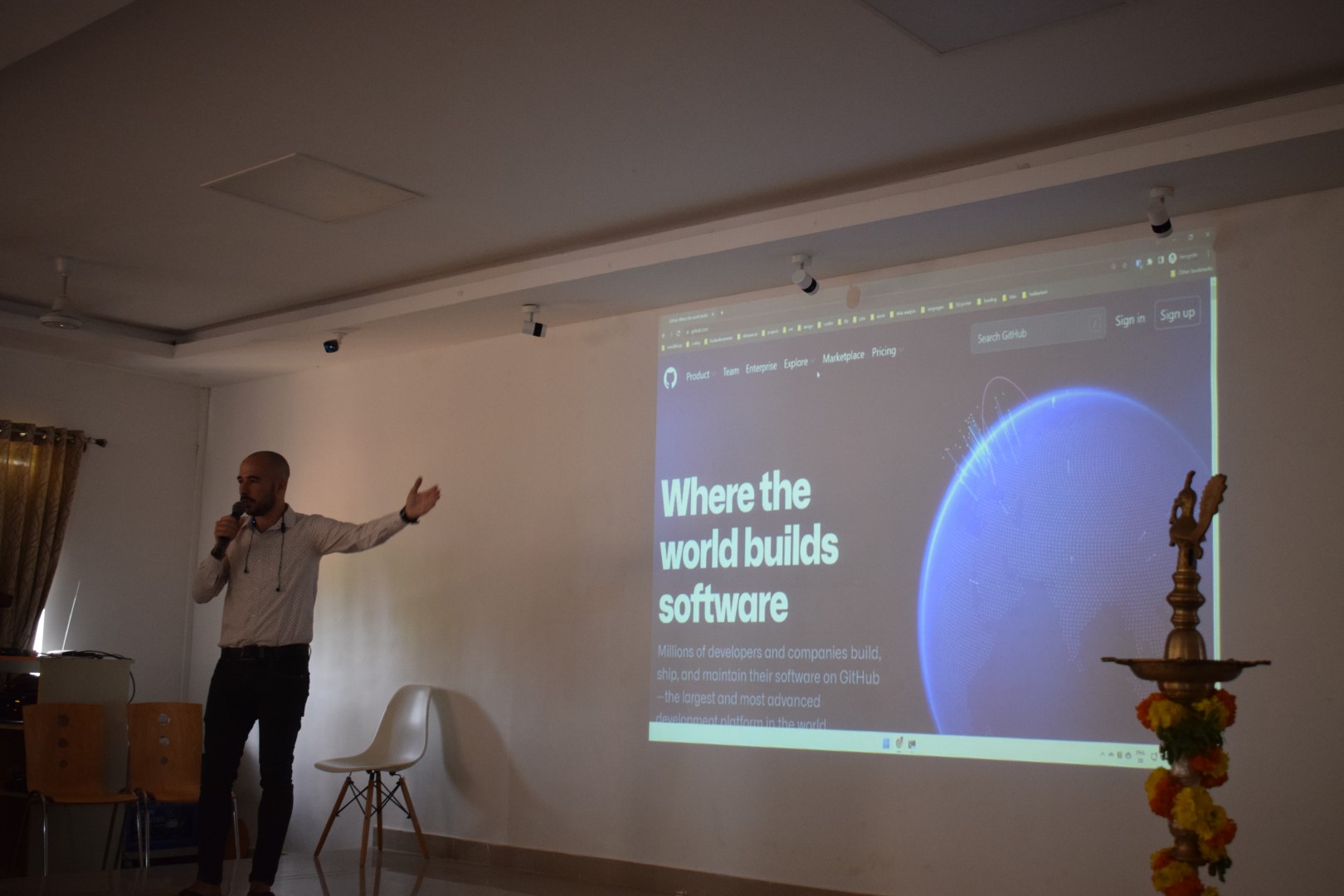 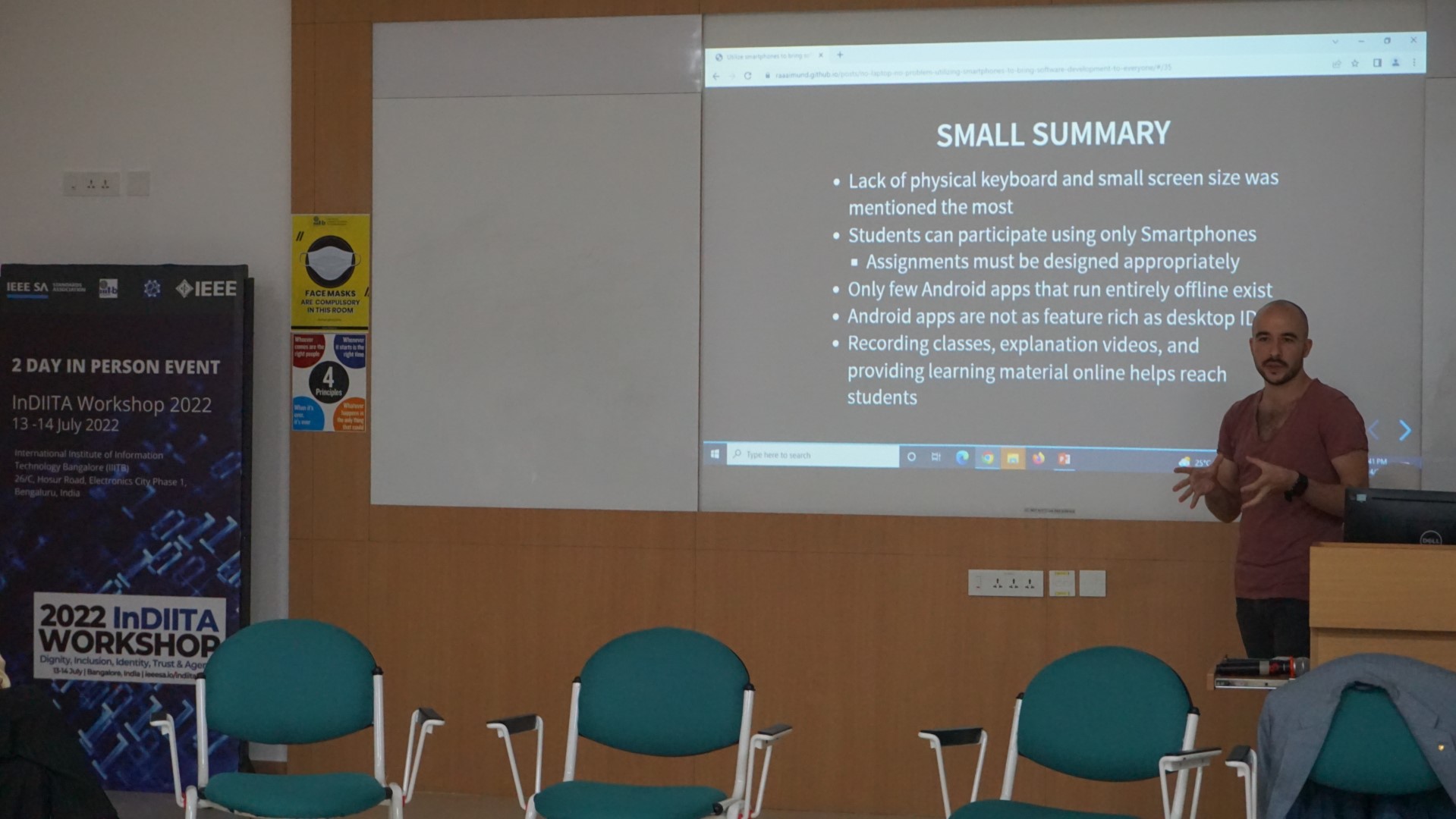 Talk at the InDIITA workshop

In an email Paul sent me after he attended the World Summit on the Information Society, he mentioned the InDIITA workshop organized by IEEE in Bengaluru. InDIITA stands for Dignity, Inclusion, Identity, Trust and Agency. Since I am working near Bengaluru, I took the bus to Bengaluru, and attended the workshop. The workshop was held in the beautiful Ramanujam building within the IIIT-B Campus. For setting the agenda for the two days, the Open Space Technology concept was used, which was totally new to me, and to be honest, I could not imagine how such a workshop will be like. Before beginning each day, the agenda was dynamically set by the participants themself. Topics and talks were proposed and put into time slots that were spread throughout the day. Afterward, participants could freely move between sessions. I really liked the four principles

and the law of Open Space Technology

Overall, it was a really nice experience, and I enjoyed the company of so many passionate people who want to use technology to improve people’s lives and help society for two days a lot. This really motivated me to continue finding solutions and exploring new things on how to include as many people as possible in the education of Software Development. If you want more detailed insights into what happened at the workshop and the sessions, check out the blog post about the InDIITA workshop. 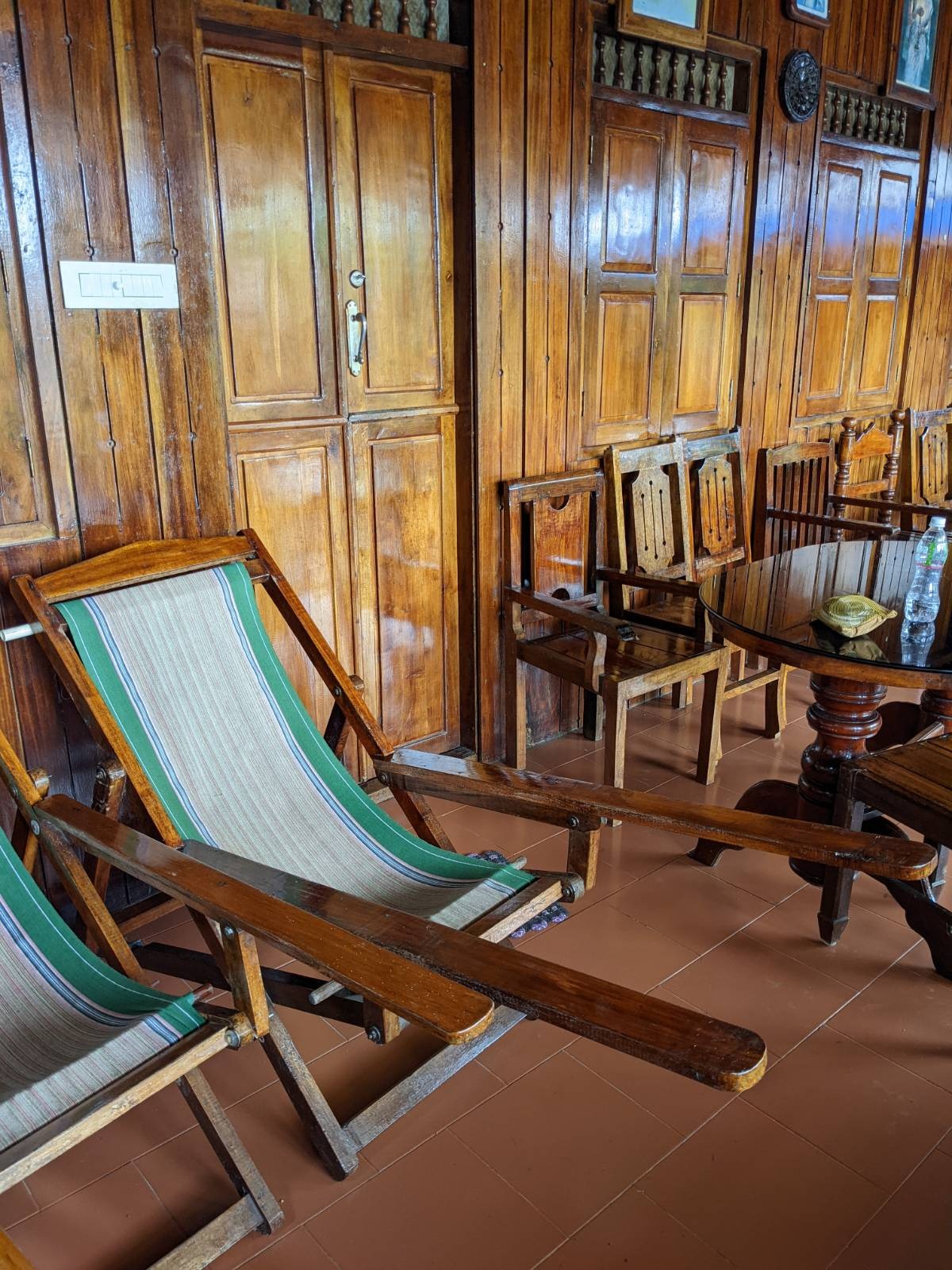 A typical and very comfortable chair in Kerala

During those two months, two friends from Austria visited me here in India, and we went on a trip for about two weeks. Our journey took us from Bengaluru to Hampi, again to Bengaluru, Kochi, Munnar, again to Kochi, then to Delhi, Agra, and back to Delhi. In Delhi, we went together to the airport, but they took a plane back to Vienna and I went to the domestic terminal to go back to my home in India near Bengaluru.

It was a really nice trip and a relaxing break, but at the same time, sometimes I felt guilty about taking a break while I also could be at the college and continue the classes and the teaching. Nevertheless, those thoughts only came up over time and also just reminded me to enjoy the moment and spend less time regretting. Altogether, the trip was awesome. Again, India showed many different faces and its own beauty in each place we visited. I also learned and experienced a lot while exploring the fauna, and flora, and by talking to people we met on our trip.

Since we were mostly in places where people speak other languages than Telugu, I could practice a little bit of Hindi. One of my favorite places was Hampi. This is a beautiful place with a lot of history and it’s also totally safe to go swimming although it is not at sea. The swimming part was welcoming since it was really hot during that time. 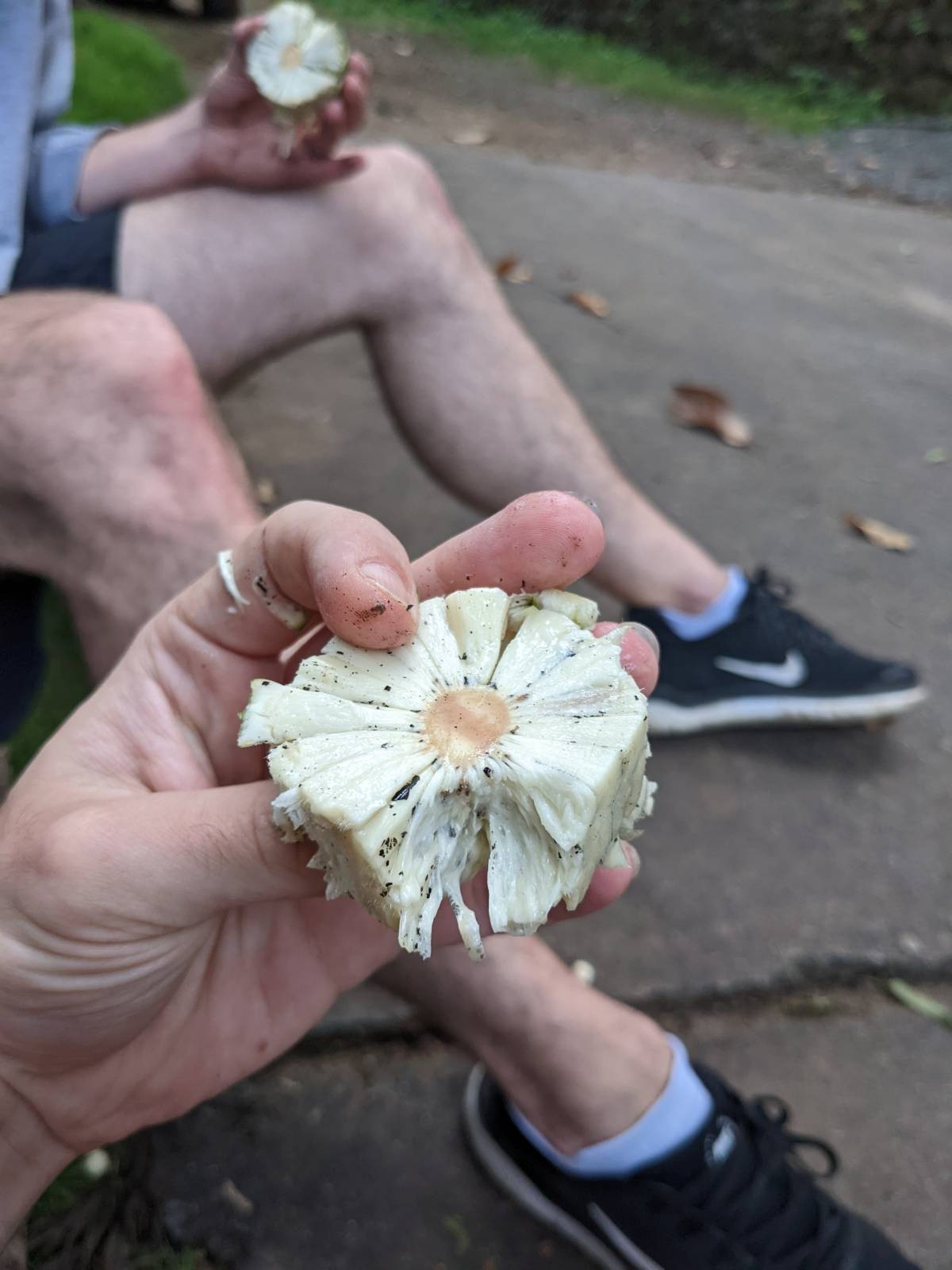 First time I tried the fruit of a Monstera Deliciosa 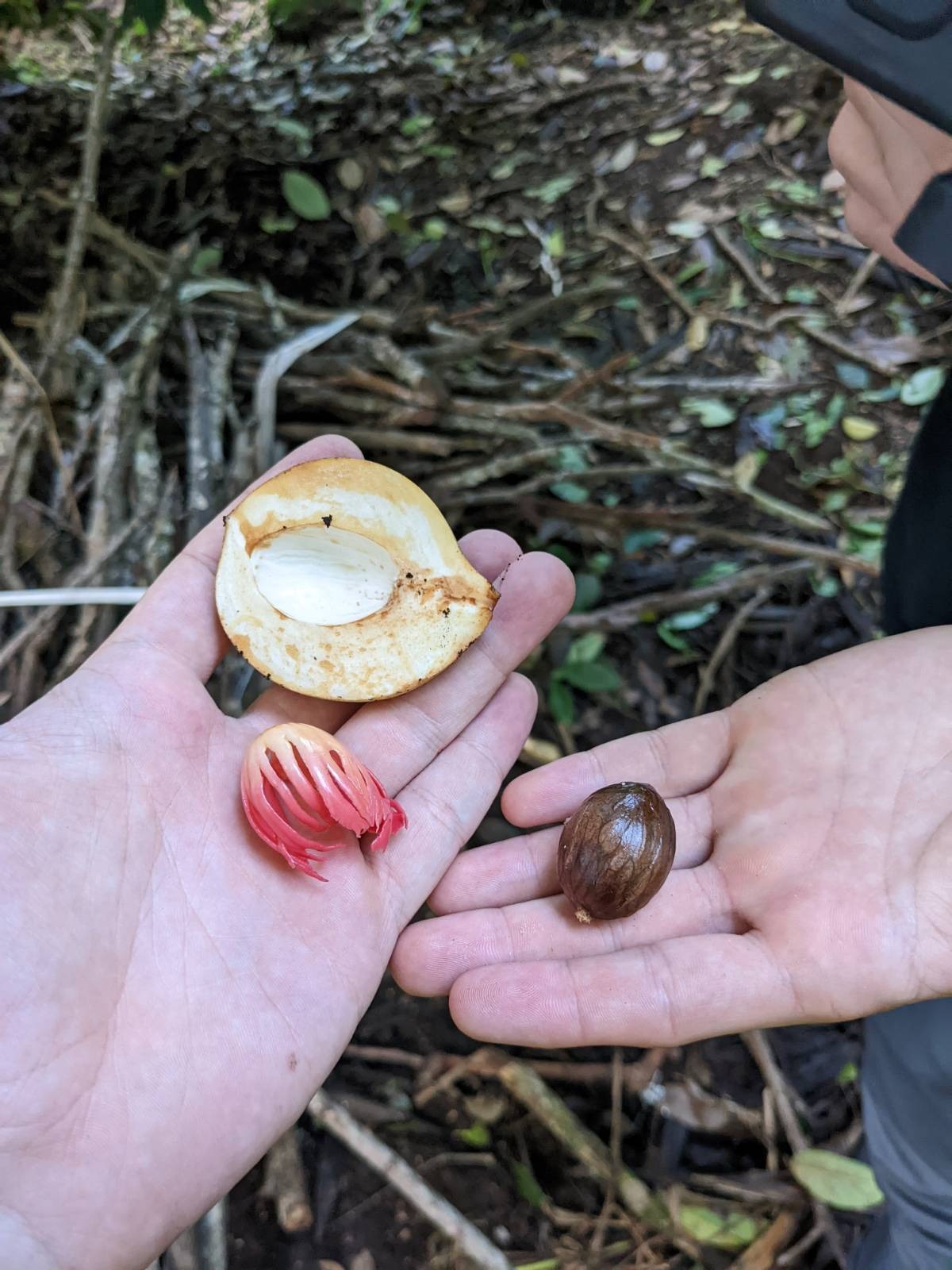 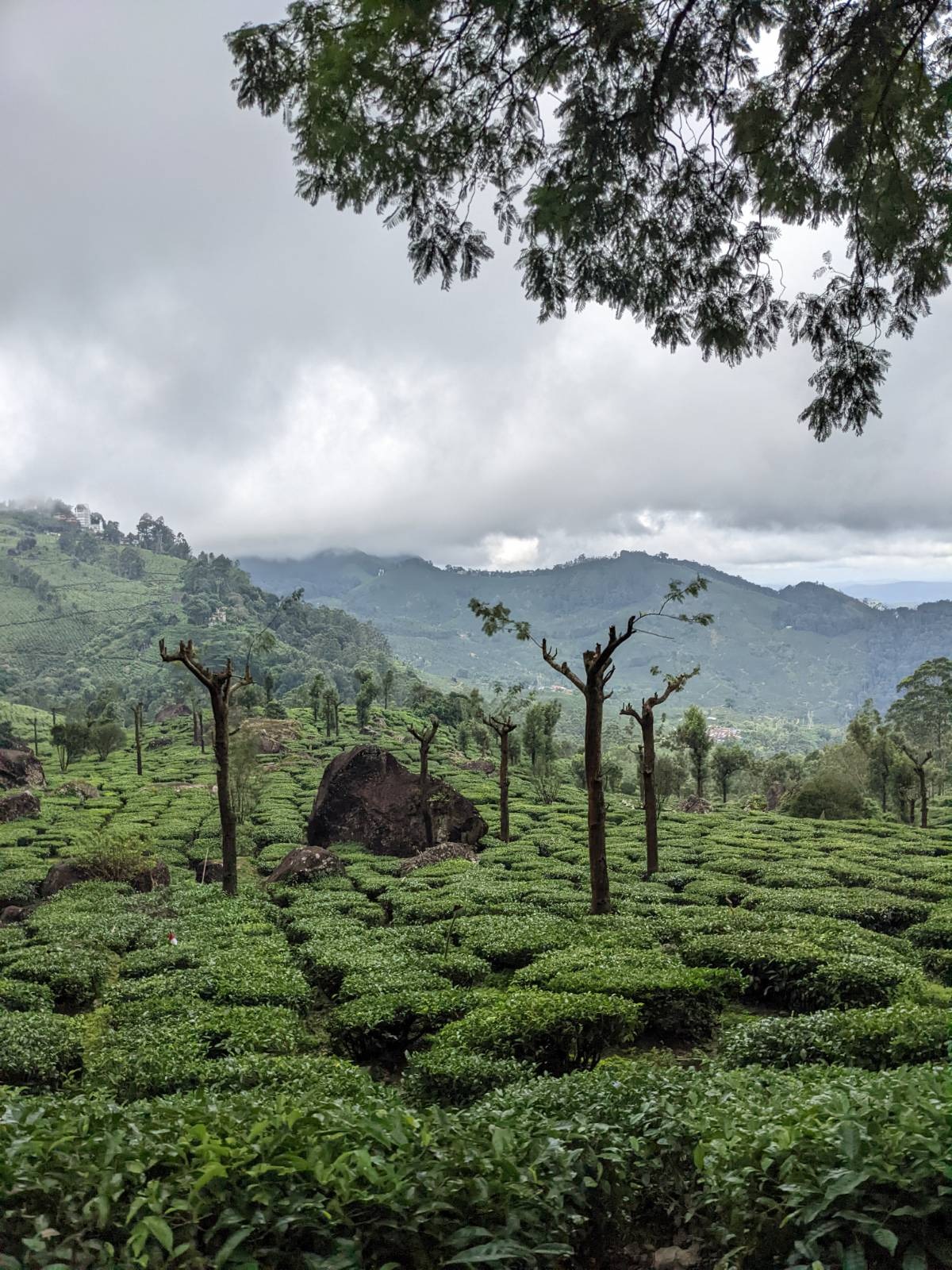 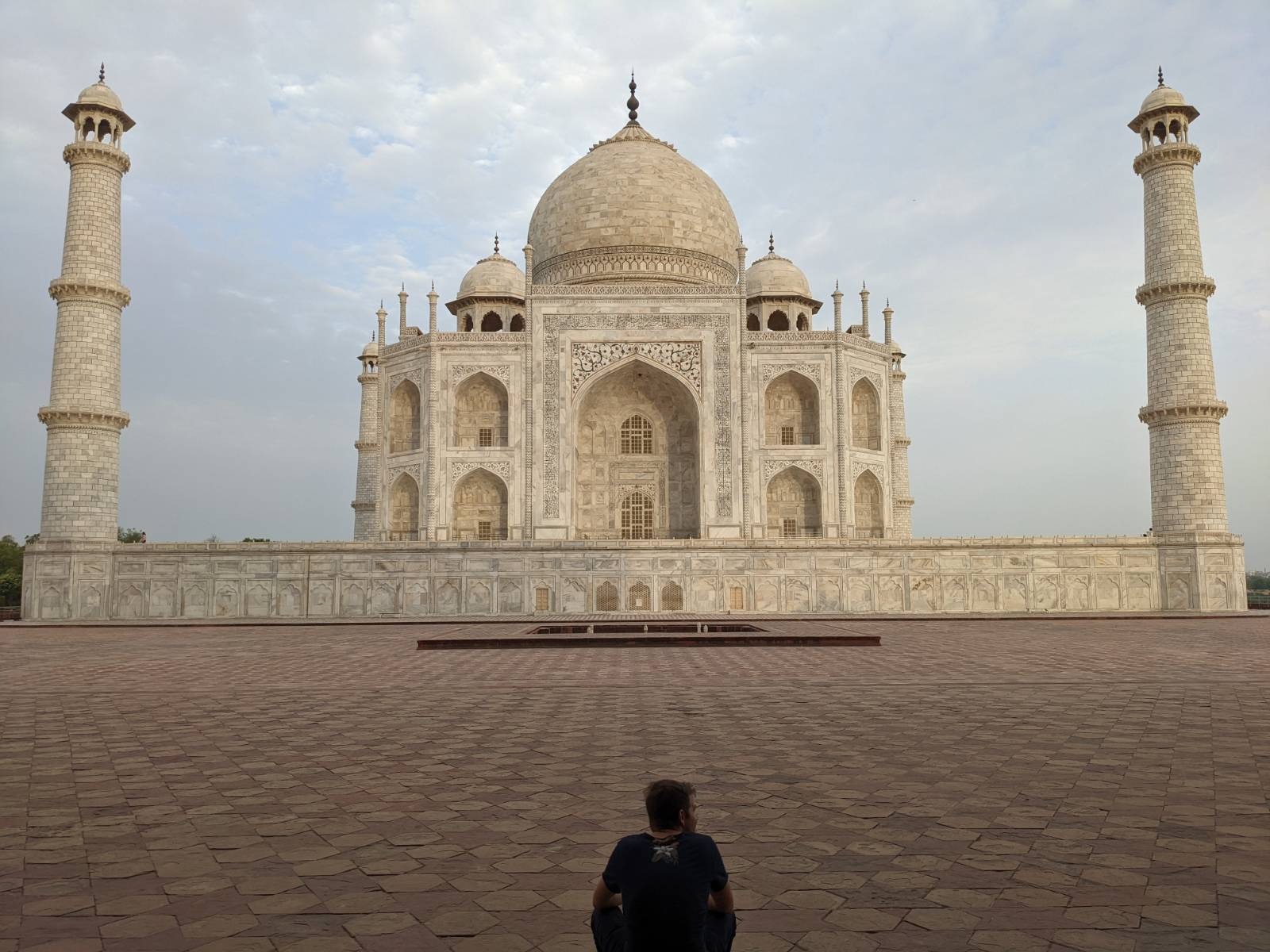 A beautiful ending at the Taj Mahal

What will happen next

The next plan is to continue teaching module 1 students and conducting submission reviews to finalize module 3. For module 1 students, I requested a second afternoon per week, so that we could spend more time learning together. Currently, I am planning also a small workshop on web development for module 3 students, but I do not know when and if this will happen. Nevertheless, my time teaching at the college is slowly coming to an end, and before I leave, I want to finish the courses and spend as much time as possible together with the students. Another idea that I want to try is to explore GitHub Classroom for use in future modules or module 4.

Also, Paul will visit me again and eventually help me a little bit to continue teaching module 1 students when I take another break to explore India a little bit further. Let’s see how everything develops, but I will keep you posted during the next month(s)!